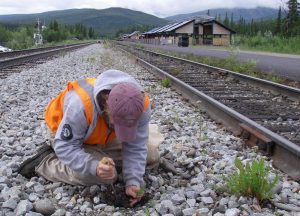 NPS Photo / Wendy Mahovlic[/caption] Denali’s native ecosystems are relatively unaffected by non-native plants. While there have been over 30 species found within the Park’s boundaries, none of these species occur mixed in the native vegetation. Denali’s non-native plants are mainly restricted to areas affected by human disturbance – for example, along the road, railroad tracks, and in construction zones. But is habitat provided by a gravel bar along a river much different from that on the side of the road? Not necessarily, and in other parts of Alaska, the most invasive non-native species have taken to following river corridors like roadways, spreading well beyond the zone of human disturbance. To ensure that Denali’s native vegetation remains pristine, park staff and volunteers work to keep populations of the most invasive non-native plants low, and away from areas of established native vegetation. Narrowleaf Hawksbeard (left, Crepis trectorum), White Sweetclover (middle, Melilotus alba), and Bird Vetch (right, Vicia cracca) are Denali’s most aggressive offenders. [caption id="attachment_1970" align="alignnone" width="1024"]

NPS Photo / Wendy Mahovlic[/caption] For more information on non-native species explore an interactive exhibit about Denali's invasive plants which shows identification tips for the Denali's worst invaders, read a science summary highlighting how invasives are managed in Denali, or view the complete list of non-native species within the Park (48 KB PDF).