Biologists may consider a plant rare because there have been very few individuals or populations documented, because it’s most preferred habitat is patchy and scattered across a large landscape, or because it requires a very specific set of habitat conditions to grow. Thus, it is possible for a rare plant to be quite common in a given area. Sensitive plants are those that appear particularly threatened by an outside force – for example, climate change, human disturbance, or competition from an invasive species.

Maintaining accurate accounts of rare and sensitive species is critical to the preservation of Denali’s biodiversity. Rare species, while they may be infrequently encountered, can play important roles in the ecosystems and local environments they occupy. The list of rare and sensitive plants below only concerns the area within Denali National Park and Preserve’s boundaries, as species included here are not necessarily rare throughout their range. Choose a species of interest, browse all rare and sensitive species included in the Atlas, or view a complete list of rare plants in Denali National Park and Preserve. [ezcol_1fifth] [caption id="attachment_862" align="alignleft" width="150"] 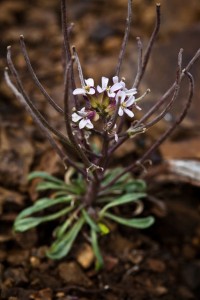