The mosses and liverworts, taken together along with hornworts, form the taxonomic division of the plant kingdom called the Bryophytes (Division Bryophyta), and are considered to be the first land plants. These small plants lack true stems, leaves, or roots but can appear structurally similar to other plants – with stem-like, leaf-like, and even root-like structures.

NPS Photo / Taylor Keegan[/caption] The body tissue of the gametophyte (the dominant part of the life cycle in bryophytes) lacks formal xylem and phloem conducting tissue like that exhibited by the vascular plant groups. Thus bryophytes cannot grow up far from the substrate that is their source of water and mineral nutrients. For example, a tree-sized moss would be anatomically impossible due to the fact that it could not translocate water very far against the force of gravity. Despite these seeming disadvantages compared to the vascular plants, the bryophytes are superabundant in many subarctic vegetation types and plant communities. In fact, there are very good reasons to believe that mosses play the defining role in many areas of Denali’s landscape. The deep layer of moss that forms in the floor of our boreal forests and cotton-grass dominated bogs has profound influences on the physical and biological characteristics of these sites. For example, the growth of permafrost under the insulative blanket provided by feather mosses (i.e., Hylocomium splendens or Pleurozium schreberi) in spruce forests results in radical changes in the soil temperature and moisture of a site, the amount of available nutrients, and the ability of vascular plants to become established, over time. Few species of vascular plants are actually capable of germinating and establishing viable populations through this deep blanket of feather mosses, thus many boreal vascular plant species require major fires or other disturbance of the moss layer in order to become established. Thus, the "climax" condition of many of the successional trajectories in boreal areas of the park might most usefully be defined by the humble moss layer as opposed to the more obvious tree canopy. [caption id="attachment_1908" align="alignright" width="300"] 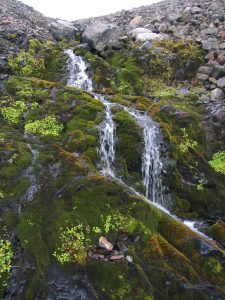 NPS Photo / James Walton[/caption] Although mosses are most abundant in mesic to wet environments within the park, they occur across the entire moisture gradient found in Denali’s landscapes. This is in part due to their ability to remain effectively dormant for long periods of time when conditions are not suitable for growth and reproduction. For example, mosses such as Rhytidium rugosum appear in boulder fields and very dry tundra on exposed- wind-blown ridges. Approximately 500 species of bryophytes have been documented in Denali National Park and Preserve. Many mosses are difficult to distinguish to species in the field because the taxonomic characters that are required to identify them require observing individual cell shapes and sizes and cell arrangements within the thallus. The small group of species included in the atlas and listed below are very common and relatively easy to recognize once you take a closer look. For more information on mosses, explore an interactive exhibit. [ezcol_1half] [/ezcol_1half] [ezcol_1half_end] [/ezcol_1half_end]

Browse All Bryophytes OR Back to Growth Forms...