The goal of monitoring projects is to measure the trend in a given resource over time – for example, is a species’ distribution changing, becoming more or less abundant, or experiencing changes in health? Monitoring provides vital information concerning the resources park managers must protect, and helps increase our understanding of how the vitality, distribution, or processes of species and ecosystems are likely to change over time. Highlighted below are just a few vegetation monitoring projects taking place in Denali National Park and Preserve – the data from which was used extensively in creating the maps, plots, and charts you will encounter while browsing species in the Ecological Atlas.

After 10 summers of fieldwork, park botanists have created a landscape-scale baseline dataset for vascular plant, macrolichen, and moss species occurrence and abundance in Denali National Park and Preserve. In the process of visiting and measuring vegetative and soil characteristics at over 1000 plots in 45 study areas, we also snapped 20,000 documentary photographs,  analyzed 1000 soil samples, took 1000 tree cores, and measured the diameter of over 40,000 trees and saplings! Similar work is now occurring in other Central Alaska parks, Yukon-Charley National River Preserve and Wrangell-St. Elias National Preserve to provide a parameter of comparison for the state of plant community diversity, composition, structure, distribution, and abundance throughout central Alaska. Additional objectives of this monitoring includes quantifying the relationship between plant species and their environment, measuring the density and area of tree species, and assessing variation in soil characteristics.

Scientists have been observing changes in the boreal forests and upland tundra of Denali National Park and Preserve for decades. Changes were presumed to be the result of a changing climate but no official studies had been established. Thus, in 1992, in order to detect continuing and future changes to vegetation, researchers developed a long-term monitoring program they thought could be sustained with what little funds were available for monitoring at that time. They chose the Rock Creek drainage, located near Park Headquarters, and began monitoring the composition and structure of plant communities in 5 distinct ecotypes – Forest, Treeline, Permafrost, Riparian, and Tundra. Objectives of the original study were to monitor the composition and structures of plant communities, monitor growth rate and reproduction of the dominant treeline species – white spruce (Picea glauca), and to collect and compare data with other similar long-term monitoring sites. While many of these objectives are now met by the more extensive landscape-scape monitoring described above, measurements at the Rock Creek plots are still repeated annually for some – such as counts of white spruce cones and seeds, and decadally for others.

In 1958, Dr. Leslie Viereck, one of Alaska’s prominent botanists, established permanent plots on stream terraces near the Muldrow Glacier in what was then Mt. McKinley National Park as part of his dissertation research on vegetation succession. Viereck measured vegetation composition and structure on different aged terraces and proposed a successional trajectory of vegetation development that would occur as the landscape transitioned from active floodplain to shrub tundra. 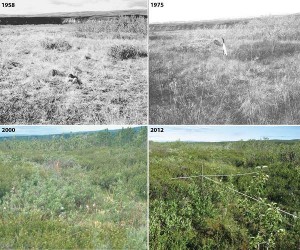 In 1975, 2000, and 2012, Park botanists revisited Viereck’s study area to assess whether vegetation development was occurring in the same way it had previously. However, data collected indicate significant changes to vegetation structure, diversity, and soil temperatures associated with the successional stages Viereck proposed. Most notably, 2012 results show a dramatic increase in the presence of balsam poplar (Populus balsamifera), possibly changing the character of those early successional landscapes toward an alternate successional path not commonly found in today’s landscapes. The careful preservation of Viereck’s original plots and datasets has allowed this research covering over 50 years to detect these unexpected changes.

People have been taking photographs of Denali’s pristine landscape since before park established in 1917. Recently, park scientists and visiting researchers have seen this trove of archival photography as a window into a past time, and a valuable clue towards what the future may hold. Repeat photography is the process of capturing multiple photographs of the same area from the same location, over different dates. The Denali Repeat Photography project is an online resource of more than 200 photo pairs taken within the Park over time periods ranging from just a few years to over a century! Each photo pairs tell its own story of change (or lack there of) but when looking at the whole set of photo pairs, overall trends are apparent. Major changes documented include the shrinking of glaciers, changes in lake and pond size, increases in woody vegetation, and changes brought on by human-induced development. While repeat photography is considered qualitative data and less definitive than the quantitative monitoring projects described above, it is extremely valuable in visually revealing potential trends to investigate, in communicating those trends to all, and in covering spans of time that lack quantitative data.

Continue on to Other Research Studies…

Yellow marsh marigold is an aquatic or semi-aquatic plant, with rounded leaves and yellow flowers in the buttercup family (Ranunculaceae).…
Learn More