What sort of vegetation is out there? What is their abundance and distribution? Are these distributions changing over time?  These are the questions Park botanists hope to find out. 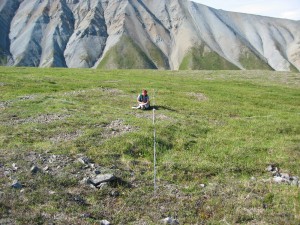 Landscape-scale vegetation monitoring began in Denali National Park in 1998.  Ten years of summer field work later and Park scientists had completed a baseline survey of vascular plants, macrolichen, and moss species in the Park.  Similar studies are now being completed in Yukon-Charley Rivers National Preserve and Wrangell-St. Elias National Park and Preserve.  Once complete these surveys will encompass 25% of the 21.7 million acres of land in the National Park Service!  A complete survey of these three parks will provide a parameter of comparison for the state of plant community diversity, composition, structure, distribution, and abundance throughout interior Alaska.

The data used to produce distribution graphs and maps seen throughout the Atlas rely on significant data analysis unique to the botanical studies described in this Atlas. Vegetation data includes over 86,000 separate observations of plant species occurring in over 3000 field sites across Denali.  Data for these graphics was was primarily obtained from the plant and soil inventories and vegetation monitoring field projects that occurred in Denali from 1998-2010.

Without a baseline inventory of the Park’s vegetation it would be impossible to quantify changes in the landscape.  That is where Central Alaska Network botanists come into play.  Each summer two crews of three botanists set out into the back country on 10 day trips to survey the landscape.  For more information about field work in Denali read about the tools Park botanists use to collect vegetation data, read a back country trip report (15 pages, 71 KB), and view a short clip of botanists in action!