The documented locations map shown for each species depicts locations where a species was observed within Denali National Park and Preserve. The maps include data from three extensive botanical studies: the landscape scale vegetation monitoring program, the floristic inventory, and the Denali soils map and ecological site inventory, along with data from historical collection records. 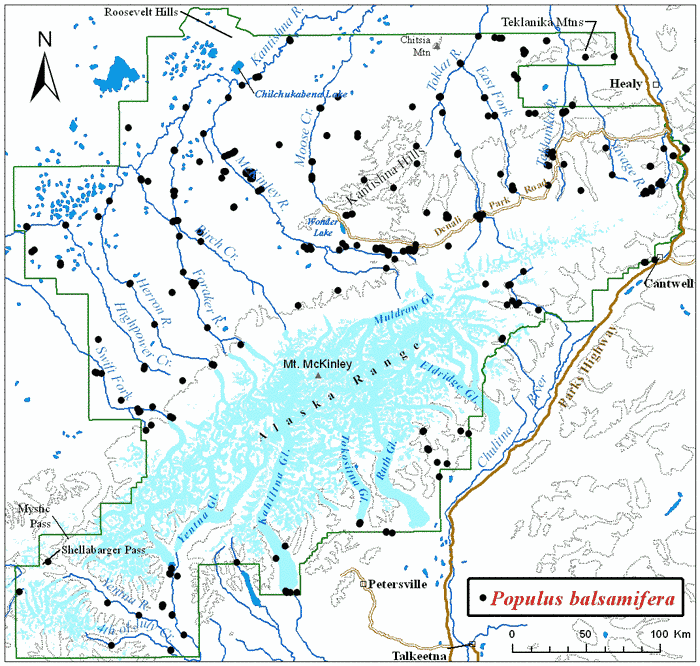 Examine the documented locations map for the floodplain tree species Populus balsamifera shown here. Note the large number of occurrences in close proximity to streams and rivers on the map. This is because this species most frequently occurs on gravel bars, preferring mineral soils and becoming established in open silt and gravels relatively early in succession.

When comparing these maps for different species, you may see common patterns in the geographic distributions of species within Denali. For example some species occur only in the low areas in the northwestern part of the Park with numerous lakes and ponds, whereas other species may be limited to particular areas in the mountainous regions of Denali (perhaps relating to different kinds of bedrock). These patterns are of great interest to botanists and biogeographers because they can give important insights into subjects ranging from species ecological preferences to the ecological history of the region and large-scale patterns of diversity.

Jakutsk snowparsley is a loosely branched forb in the parsley family (Apiaceae) with an open umbel of white flowers, found…
Learn More