Denali National Park and Preserve, due to its relatively accessible location and world renown as a scenic destination, has attracted the attention of  plant and wildlife biologists from around the world since its founding as Mt. McKinley National Park in 1917. This long history of scientific interest, in combination with several large botanical studies completed by the National Park Service over the past two decades, has produced valuable information about Denali’s plant diversity and distribution that is unique for any similar-sized area within Alaska. 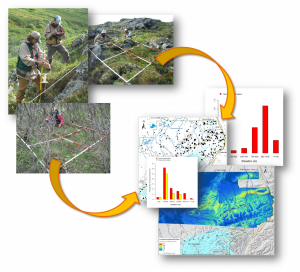 This Ecological Atlas of Denali’s Flora was compiled to share that information by presenting narrative species accounts alongside a catalog of photos, occurrence maps, and charts and graphs illustrating each species varied relationship to the ecological gradients encountered across Denali’s landscape. By providing descriptions of the morphology, appearance, geography, and habitat of the fascinating and diverse species included in the Atlas we hope to draw attention and appreciation towards Denali and Central Alaska’s flora.

Please take this Ecological Atlas as a point of departure for learning about all of the intriguing plant species and habitats that reside in Denali. Explore the sub-pages in this section to learn more about this project and explore other projects of interest. The maps and graphs presented here are specific to Denali, relying on large datasets recently compiled. Information in the narratives was assembled from other web catalogs of plant species data, a variety of literature sources and our own experience – as dozens of people have contributed to this project over many years.

Siberian aster is a purple-flowered member of the aster family (Asteraceae) that occurs widely in Denali, primarily in floodplains but…
Learn More